In November 2011 people from the seven congregations who were working on immigrant justice met and shared the goings-on in their congregation and in their immigration-focused groups. Several congregations already had established groups meeting regularly and working in partnership with community organizations, and representatives from these congregations were able to share how they got started, some of their recent successes, and some best practices that had been working for them. Congregations new to the issue and with groups still in formation were able to learn from the more established groups and collect ideas to take back with them to their congregations. At the meeting, we established an immigration-focused Google Group for the cluster, so leaders from each congregation could communicate with the other, share events and announcements, and work on cross-congregation collaboration. It was an exciting evening, with many ideas generated and much energy around working together as a cluster on this justice issue. 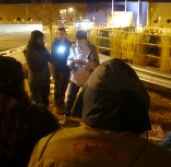 Following the meeting, the Google Group grew and leaders began using it to communicate, not only about goings-on in their groups but also in the Boulder-Denver area. There are many organizations in our area working on issues of immigration justice, and the cluster of congregations was able to pool their knowledge about these organizations and begin to create accountable community partnerships, as well as send members to attend events as a cluster group. New immigration groups formed in several of the cluster congregations and began collaborating with the more seasoned groups. Energy grew exponentially in the cluster around immigration!

In February 2012, one of the newer immigration groups decided to adapt materials from the UUA’s Immigration as a Moral Issue curriculum to create a five-week immigration series. The goals were to educate members of their congregation on issues of immigration justice, to encourage people to connect personally and theologically with the issue, and  to support deeper reflection and investment within the congregation. But instead of offering the series only to members of their congregation, they advertised the series to the entire cluster via the Google Group. And an amazing thing happened! Several of the other congregations, who had been contemplating running educational series of their own, decided instead to send members to attend this series.. It was an exciting development and a new level of collaboration for the cluster. Members of four congregations attended the five-week series, learning and growing together, as well as creating relationships of greater depth between members of different congregations. Members of each congregation took their learnings and the resources distributed through the class back to their separate immigration groups for further reflection and discussion. There is now talk of another one of these congregations hosting the next iteration of the series and inviting all of the congregations in the cluster to attend, as members of all of the groups continue to learn more and deepen their commitment to this justice issue.

This model of cluster-level collaboration around an issue of justice is incredibly exciting and energizing. Seeing Unitarian Universalists reach outside the walls of their congregations, to connect with each other and with community partners is inspirational. And it also has many advantages!

The next step for our cluster is another face-to-face meeting of the leaders of each congregational immigration group, to continue to build personal relationships, as well as to brainstorm further collaboration and coordination as a cluster. I look forward to seeing what the next few months will bring and how our cluster justice model will continue to grow and change. I know that if we continue to work together in ways that create more justice, the sky is the limit!