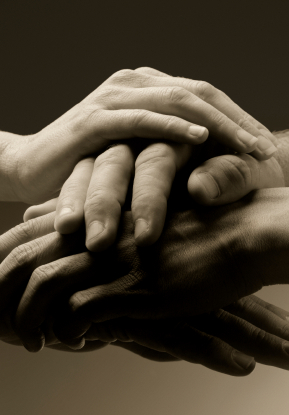 Within eight days following the accident, leaders from the Ecuadorean community emerged and a meeting took place in which 250 people participated after receiving only eight hours notice.  The Ecuadorians, who are mostly Catholic, were offered meeting space and support by the local Catholic Church, St. Mary’s of the Assumption.  Over the coming weeks several more meetings of the Ecuadorean community took place and eventually included allies from Unitarian Universalists, Quakers, AFSC/Providence, MIRA Coalition, Centro Presente, Lutheran Immigrant and Refugee Service, both Latino priests associated with St. Mary’s and an Anglo community members from Milford.

The Ecuadorian attendees at these meetings were reluctant at first to publicly share the indignities and the severity of the oppression they were being subjected to.   The meeting leaders strongly urged them to let go of their fears and speak, calling on a “now or never,” expectation due to the presence of allies.  Five women stood up and bravely spoke of their experience, followed by several men. They told stories of being spit on and having bottles thrown at them, as a community they expressed that they were frightened for their safety.

Because the Ecuadorean community did not feel safe doing basic task like grocery shopping, their leaders requested that the allies support them by transporting people to the grocery store on the weekends.  The community asked for help with this because for many families, their only vehicle is the truck used for the husband’s construction job.   When the family rode in these vehicles they were frequently targeted by local police.

With the help of other allied communities, we at First Parish Church in Northborough helped organize volunteers and transported people to the grocery store.  The action allowed trust to develop between the Ecuadorean population and the “Anglo” allies.  The Ecuadorian community expressed deep appreciation for the allies’ support and our solidarity with them helped empower their leaders to respond to the crisis with courage rather than fear.

As the shopping trip transportation program progressed, it became clear that the children were reluctant to be separated from their parents.  In response to this problem, First Parish Church Northborough took up a car and booster seat collection.  Thanks to the generous support of our congregation, we were able to make car and booster seats available to the people providing transportation, thus allowing the children to remain with their parents.

As our relationship with the community continued, we were invited to support the ESL program being run by St. Mary’s church.  Several members of our congregation volunteered to be substitute teachers through the holiday season.  The volunteers reported that the experience was a rewarding one and our congregation gained valuable experience which will guide us as we continue to explore developing our own ESL program.

The experience reminded our congregation what solidarity looks like.   An effective ally knows that it’s important to get to know our brothers and sisters who live in our communities and that we come to understand the unique challenges faced by all.    Those of us in the majority do not have all the answers and should not try to be a “helper” who “fixes” problems.  Rather, we should strive to be allies who listen to those who are experiencing injustice and know that what affects one person, affects the whole community.  It is important to remember the words of Benjamin Franklin, “Justice will not be served until those who are unaffected are as outraged as those who are.”

Laura Wagner is chair of the Social Action Committee at First Parish Church, Unitarian Universalist in Northborough, MA. This piece was originally published in January 2012 in Acts of Faith, the UU Mass Action Network blog.