In this post, reprinted from a January 26, 2012 entry in her own blog, Rev. Kathleen McTigue shares what happened when she and others worked together to hold the mayor of East Haven, Connecticut, accountable for his lack of response to federal indictments brought against police officers in the city, charging them with racial harassment of members of the Hispanic community.- Ed

It’s been a busy week in East Haven, Connecticut. 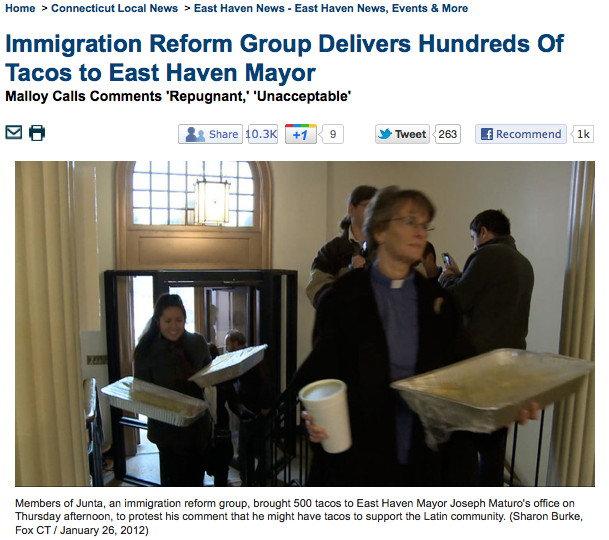 On Tuesday, the FBI arrested four East Haven police officers on charges of false arrest, excessive force, conspiracy and obstruction of justice. The charges were related to many years’ worth of abuse that Hispanic members of the community have suffered, including racial profiling,  harassment and beatings. In its indictment the Justice Department accused the East Haven police of “biased policing, unconstitutional searches and seizures, and the excessive use of force”. The New York Times called it “a  harrowing picture of arbitrary justice for Hispanic residents.”

One would hope that this kind of news would receive widespread attention and outrage, but in today’s world that seems to be the luck of the draw: sometimes people pay attention and sometimes they don’t. This time, thanks to the remarks of East Haven’s mayor, Joseph Maturo, the wider world is all over the story.

On Wednesday, Maturo was interviewed about the arrest of his police officers by a reporter for WPIX (Channel 11), who asked what he intended to do for the Latino community in light of the charges. Maturo replied, “I might have tacos when I go home. I’m not sure yet”. During the nearly five-minute clip — which immediately went viral — Maturo became more combative but never truly engaged the question. He returned repeatedly to the taco statement. 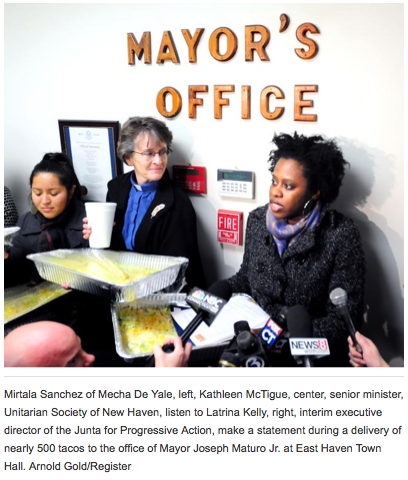 So today, I helped deliver around 500 tacos to the mayor’s office in protest of both his insensitivity and the larger issue of racism in our area. This brilliant idea was hatched by Reform Immigration for America, which invited anyone outraged by the mayor’s remarks to text them and order a taco to be sent to the mayor. It was enacted by Junta for Progressive Action, the lead organization serving the Spanish-speaking community in the greater New Haven area.

We were a small group, led by Junta’s Acting Director, Latrina Kelly. The restaurant that had agreed to make the tacos was in over its head: the protest orders kept flooding in until within just 24 hours, they’d received over 2,700 texts. The media attention had also made the restaurant owners and workers nervous: they requested anonymity, and accompaniment for delivering the tacos. So, off we went, about a dozen of us carrying trays and trays of tacos. We walked in through the big glass doors of town hall and were met by literally dozens of reporters and television cameras, everyone jockeying for position.

The mayor had fled just before our arrival (what a surprise), but Latrina delivered her statement to him anyway, with poise and passion. When it was all over the tacos were delivered to a local soup kitchen, with the exception of one tray left for the mayor, along with a printed copy of the statement he missed out on hearing.

It’s clear that the mayor regrets his tone-deaf comment about tacos. It’s less clear whether he will use this as a wake-up call. East Haven is surely filled with thousands of men and women of every ethnicity who want their town to reflect the values of inclusion, civility and equality before the law. It will be up to them to make sure their elected officials — and their police officers — fulfill those aspirations.