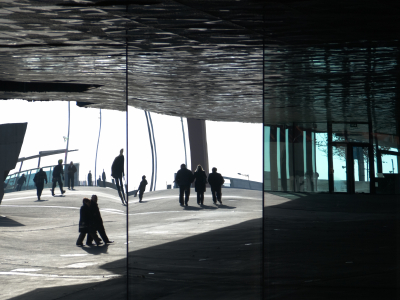 Two summers ago, on July 29 2010, I was restless, pacing, watching Facebook for word from Phoenix as one by one Unitarian Universalist leaders were arrested in an act of civil disobedience. The discussion prior to this had been riveting; some people were saying that the call that had come from our partners to protest SB 1070 was another call to Selma. At the recent General Assembly the vote was to go to Phoenix in 2012 at the request of our partners and hold a justice GA. Immigration justice had jumped from something I was generally aware of to something on the front burner of my professional life. I was paying attention.

But paying attention to what? Was this an educational project, one that required me to learn the facts so that I could support an immigration justice position in a political debate? Was I required to pay attention to the stories of those whose lives or well-being have been destroyed by the policies of my country? Or was more required of me – something deeper, something more spiritual? A change of heart? Two years ago, these questions lay before me, as I suspect they do before many Unitarian Universalists in the days leading to Phoenix.

Understandable. I want to have it all worked out.

I was terrified when I began the immigration justice resources project. As an educator I am used to teaching from what I know, drawing from a deep well to guide others to new learning. This project asked me to move into a place and a set of issues of which I had only a passing knowledge and understanding. It was asking me to stretch –  and to invite others to stretch as well. In this learning community we call “Cooking Together,” people are invited to listen, to consider things they have not thought about before and to then take a risk by sharing their own process and their own learning. People in all kinds of different places who are on the path have entered the conversation. We share discoveries. And questions. Lots of questions that lead us ever deeper into understanding the nature of the injustice we witness in Arizona, in Alabama, and, yes, in Michigan, Colorado, Massachusetts, California, New York, and everywhere else in our land. We hear voices of those whose perspectives and identities are different from our own. We hear the call to understand the current crisis as one of the current manifestations of a story of exploitation and domination that goes back half a millennium.

So how do we approach Justice GA? We begin with acknowledging that injustice toward migrants is not a problem over there, somewhere else, only in Arizona, or Alabama. It is something that is happening and has happened all over our land. And that the perpetrators of the injustice are not just those we can point to and protest against- the perpetrators are all those who benefit from a system that oppresses some and privileges others – including me.

We can approach with an attitude of humility. What does the geography of the Southwest have to teach us? Climate? The culture? The history? The languages that are spoken? The stories that are told?

We can throw away the comfort that comes with having all the answers, or knowing what all the right things are to say and do. We can go with gratitude for the willingness of others to partner with us in our learning. We can go with joy at the possibility of encounters that will change us as individuals and as an association. We can take seriously the spiritual challenge that accompanies such encounters, helping each other stay present and grounded, exercising care with ourselves, with one another and with all those who are attending GA. We can embrace the gift of our theological tradition, and move joyfully and with open hearts, open minds, and open spirits, expecting to be changed by what we encounter.

May we bless one another and be ourselves blessed by our time and our work in Phoenix and in the days, weeks and years that follow this Justice General Assembly.

Gail Forsyth-Vail, co-editor of Cooking Together, is Adult Programs Director at the UUA.