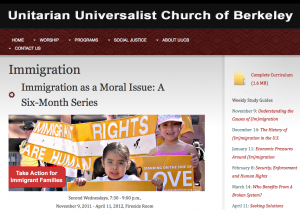 In February, our theme was God. Our ministers, just back from a Borderlinks trip, preached “Good With God” one week, and “Good Without God” the next, describing both religious and non-religious organizations that do important humanitarian work on the border. After hearing their stories about Good With God, I was inspired to tell a story about the time God tried to cross the border.

Afterward, many of our RE classes talked about the ways different people understand God, and how some people see and find God being present in their lives.

Last Sunday we finished a month-long intensive focus on immigration in our RE classes, using the recently published (and excellent!) curriculum With Justice and Compassion. Along the way, we found as many ways as we could to include the whole congregation in the conversation. We held our Family Heritage Potluck after church on a Sunday and invited everyone to come. We posted a map of the world and immigration timeline in a central place so everyone could add the places and dates of their family heritage. One of our co-ministers, Rev. Barbara Hamilton-Holway, described the curriculum in a sermon, and tested the congregation’s knowledge with questions from the quiz game. Laura Bogle and I told a story to show how silly some of the “nativist” ideas are. We started the story by inviting everyone to name aloud the places of their family heritage. Then we told a story about a Sheriff who got the idea to send everyone in the U.S. “back where they came from.” In the end, he discovered that once he got started, he eventually had to deport almost everyone, including himself!

We followed the story with a Children’s Chapel for all our classes together. In the Chapel we sang Woody Guthrie’s Deportee, and talked about why he wrote that song. Then, we did an activity for children to learn about power and privilege. We spread out a couple hundred poker chips in the middle of a circle of children. We gave five of the children 10 poker chips to start, and asked another 5  to put socks on their hands.  The children were then asked to collect as many chips as they could. As you can imagine, those who started with chips ended up with the most, and those who had socks on their hands ended up with few or none.  In the lively discussion that followed, children quickly pointed out the ways in which this is like the real world. We talked about how sometimes the set up is not fair, and that as Unitarian Universalists we believe in fairness.  When we invited them to imagine how the rules of the game would be different if it were a Unitarian Universalist game, creative answers sprang up immediately: “No one would have socks on their hands, and no one would start with more,” and “There would be a limit about how many chips each person can get, no more than five!” and “We could just count up all the chips and all the people and give a fair number to each person.” In the course of the conversation, we drew the connection between this game and unfair immigration laws. We sang Mary Grigolia’s song “Safe Passage” to one another as we left the classroom to join families for our Family Heritage potluck. Over Iranian rice with lentils and raisins, El Salvadoran beans with coconut milk, and an Italian zucchini dish, families told their stories of migration.

Now, we’re getting ready for our turn to lead the monthly interfaith immigration vigil at our local ICE detention center!

Marcus Liefert is the ministerial intern at the Unitarian Universalist Church of Berkeley, CA.